Report: Digital Disintermediation and Efficiency in the Market for Ideas -CREATe Lecture by Dr. Christian Peukert 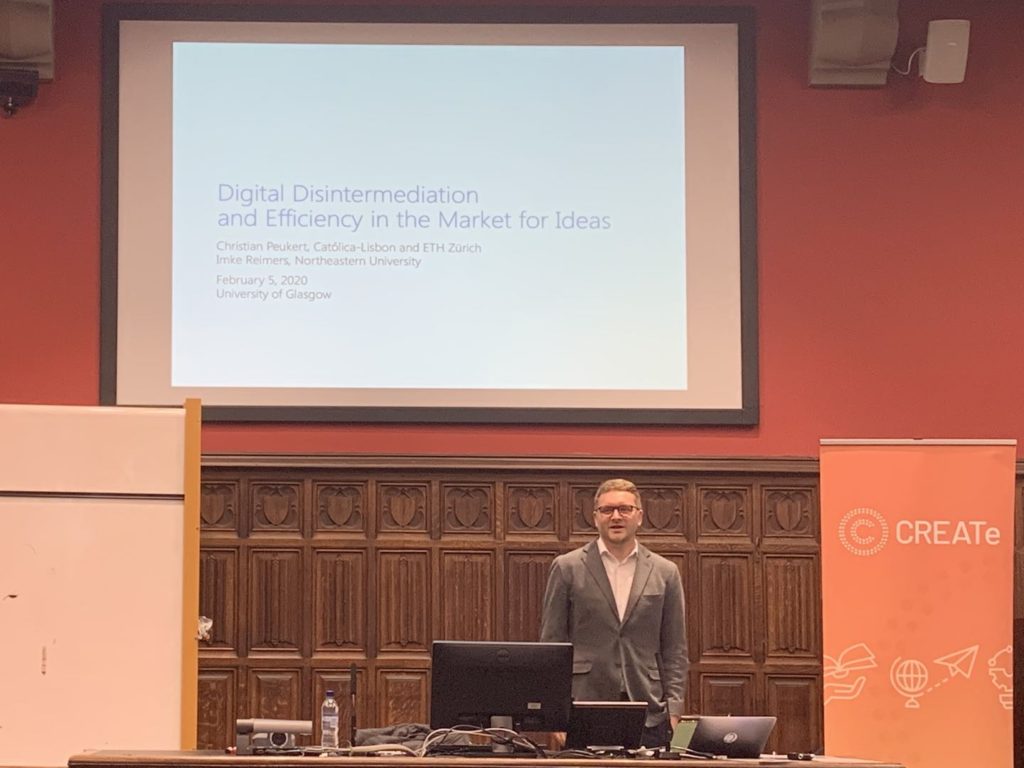 On February 5, 2020, CREATe had the pleasure to welcome Dr Christian Peukert (Assistant Professor of Information System and Management at Católica-Lisbon School of Business and Economics and Senior Research Associate at ETH Zürich – Center of Law and Economics) at the University of Glasgow. Christian presented some of his research in Digital Disintermediation and Efficiency in the Market for Ideas from an economist perspective. The lecture was the second of the CREATe’s 2020 lecture series; Chaired by Professor Martin Kretschmer.

He introduced their idea of the ‘Digital Renaissance’ which led to inter alia lower fixed costs for production, promotion and distribution in the artistic market. Hence, enabling more small firms and individuals to enter the market of ideas. As a natural consequence, more books in general were published since the digitisation. After outlining general trends in the creative industry, with a major focus on the book market, he outlined the change in the industry which allows more authors to pursue a rather uncommon and more direct way to the market through self-publishing. Through extensive analysis of licensing deals reported by “PublishersMarketplace” from 2002-2015, it became apparent that Romances/Erotica got true frontrunners after 2008. However, the same could not be said for the traditionally published Romances/Erotica. This is due to the fact that digitisation made self-publishing easier, cheaper, faster and non-binding to a ‘quality control’ of the traditional publishers. Traditional publishers, he continued, would only consider publishing works in which they see an economic potential for revenues. Christian introduced us briefly the ‘size categories’ of the license deals in the book market, reaching from ‘Nice’ (the lowest, less than USD 49k) and the ‘Major’ (the highest, more than USD 500k). Afterwards, he carried on with explaining the audience what a possible cause for the rising ‘demand’ of Romances/Erotica may be. Indeed a ‘natural demand’ for Romances/Erotica, he determined, has always existed but was not pursued, as the majority of potential readers was intimidated by showing off the covers of the books their reading in public. This changed with, as he named it, ‘stripping off covers’ with the release of ‘E-books’. An E-book allowed the readers, firstly, reading a book without feeling intimidated by ‘judging sights’ in public.

The provided graphics were proving that both the non-romance books and romance books followed similar upward-trends. However, deals for romance novels got significantly bigger since 2008. However, this finding is more significant in the US than in Europe, as the graphic provided showed. In Germany and France, on the contrary, no significant change, in the given time frame, could be elaborated.

By graphical presentation it was shown that two times more books were put on the market since the rapid uptake of the digitisation in 2008. As he explained beforehand, the readers in the US tend to use much more E-book devices and value them more than Europeans do.

Consequently, ‘authors not only get more of the pie but the pie in general gets larger’, as Christian described it.

To prove this hypothesis, license deals (ex-ante predictions) were compared to future profits (ex-post appeal). By doing so, the prediction error in pre- and post-digitisation was calculated. As more information about the books, and according to it the potential deal, was available on the market, publishers were enabled to use this information to scrutinise the market potential. Hence, predictions became more precise. Following, much less ‘false negatives’ (too little licensing fees are being paid to the author) appeared, which could be explained by the shift in bargaining power; ultimately, causing authors to get better deals. The ‘false positives’ (too much licensing fees being paid to the author), furthermore decreased slightly, which stands in no relation to the shift in bargaining power. As a result, one was shown that publishers are making less prediction errors than prior 2008.

Subsequently, Christian concluded that with the Digital Disintermediation the variety of available titles, at lower prices, increased, which potentially improves consumer welfare. Larger license fees for authors became apparent and might increase incentives to produce for authors, which leads inevitably to the progress of innovation. Furthermore, he underlined the fact that self-publishing will not make traditional publishing redundant. Remarkably, he suggests that the findings can be transferred to similar markets.

On behalf of the Glasgow University Student IP Society, we want to thank Imke and Christian for giving us the opportunity to learn from their research and for their time and effort.